“Blue Bird” – the ex-Blue Bird Garages (Hull) Ltd – 1952 Leyland Royal Tiger  41-Seater Coach – Coachwork by Plaxton – Registration no. NKH 46 – Chassis no. 515490
One of the largest builders of commercial vehicles in Britain by the 1930s, Leyland expanded greatly from the 1950s onwards, taking over Albion Motors in 1951 and Scammell in 1955. Carmaker Standard-Triumph was acquired in 1961 and the following year Leyland purchased its old rival AEC, which had already bought out Thornycroft and Maudslay.

Introduced in 1951, the Royal Tiger was the first of Leyland’s under-floor engined single-decker coach chassis, embodying a concept that had been under consideration since the late 1930s. Its engine was a horizontal version of the firm’s well-tried ‘0600’ six-cylinder diesel, while the rest of the components likewise came from the existing Leyland range. The Royal Tiger was a huge success for Leyland, finding customers with fleet operators the world over. It was for all intents and purposes the ‘Rolls-Royce’ of coach chassis.

This particular example – chassis number ‘515490’ – wears Venturer coachwork by the long-established commercial vehicle body maker, Plaxton, of Scarborough, which celebrated its centenary in 2007. Introduced in 1951 to replace the Avenger, the versatile Venturer body was available in versions to suit front, under-floor and rear engined chassis.

This vehicle was supplied new and first registered to Blue Bird Garages (Hull) Ltd on 27th June 1952 for use on British and Continental luxury tours. ‘NKH 46’ is unusual by virtue of its early centre-entrance Plaxton Venturer body, as very few of this type were built on under-floor engined vehicles. The later style had a flatter nose and a front entrance. This highly desirable feature enabled the first row of passengers to be right up front with a clear view of the road ahead.

‘NKH 46’ was sold by Blue Bird in March 1955 to E Morby & Son of Droylesden, Manchester and operated by them for 21 years, outlasting many newer vehicles and becoming Mr Morby’s favorite. In 1976 Morby sold out to Maynes of Manchester and subsequently ‘NKH 46’ was acquired from them for preservation. In March 1978 the vehicle was registered to Blue Bird Bus Preservation Group in Hull, from whom it was acquired by the immediately preceding owner, Graham Bedford of Scarborough, in October 1984.

The vehicle benefited from an exterior repaint in Blue Bird livery (in 1977/78) and a complete interior repaint and refit (in 1979/80) while retaining the original red moquette upholstery. In 1981 the exterior paintwork was varnished and in 1981/82 some major mechanical work was undertaken. A further re-spray was carried out in 1995.

All the original fittings are retained, including the Tannoy public address system; original HMV radio and its speech amplification equipment for passenger vehicles; original and detachable headrest covers (Blue Bird monogrammed); and original seat numbers, mirrors and ashtrays. In addition, the vehicle boasts high-vision glass panels (front and rear) for appreciating the scenery and a huge fully working sliding sunroof section to the centre.

Generally in good condition, ‘NKH 46’ is offered with its original logbook; copy and old-style Swansea V5 documents; assorted MoTs dating back to 1976; sundry bills; a quantity of old tax discs dating back to the 1960s; assorted correspondence and Blue Bird Coaches information; Perfect for touring in style and attending a wide variety of historic commercial vehicle and other important events.

Viewing is essential although by appointment only. Don’t hesitate to contact if you have any questions or would like to book a viewing – 07932 970154 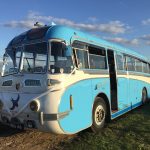 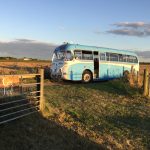 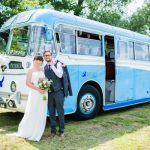 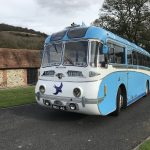 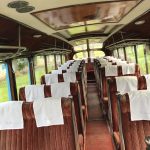 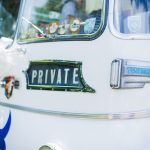 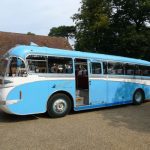 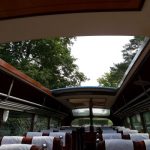 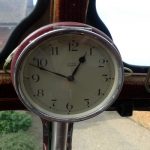 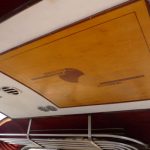 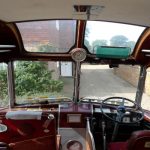 Please be aware that the specification on vehicles can sometimes differ from that shown above, including as a result of the use of third party data. Mileage readings are approximate only. Please reconfirm any details that are important t